I spent Sunday with friends exploring the Lava Fields between two active volcanoes - Mauna Loa and Mauna Kea. My friend Hui, from Yale, and her fiance, Brett, were going out to do a field day for Brett's research on primary succession of lava flows. They allowed Max and I to tag along and help with the measurements. It was such a great day of research, spelunking in an old lava tube, talking about goddesses and polynesian spirituality, as well as fulfilling a professional goal of visiting the Mauna Loa Observatory. Despite a cut up hand and sneakers and a sunburnt neck the day was one of the best in Hawaii so far. 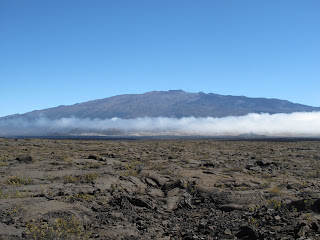 Welina mai nei me ke aloha. Welcome to Our Land.
This is a saying on an ad in the magazine, “Ke Ola” or “The Life”. A magazine for those who love life on the Big Island. So far in my short time here in Hawaii I have noticed that those that live on the Big Island are truly devoted to her. One can quickly see that the Big Island is not the Hawaii of tourist’s dreams, it’s very different and automatically has a quiet, homey feel to it. Perhaps I am wrong since I am making this judgment without having wandered over to the other islands. Sure the Big Island has amazing beaches and coral reefs but it’s mostly old lava fields, ranches (the largest ranch in America, Parker Ranch, is here in Waimea), agriculture like taro, coffee, and macademia nuts, and residential areas.
The research project that I was hired for the summer to work on is on land cover or land use change over 200 years combined with a material flows analysis of everything that has come in and gone out on the Big Island for the same period of time. It is funded by the National Sciences Foundation, which is a pretty big deal in the research world. My first NSF project, and hopefully not my last. The component of the study that I am working on is using satellite data from 1977-2010 to assess how urban areas have expanded in two towns on the Big Island – Kona and Hilo. Hilo has a very “old Hawaii” feel to it. Having survived two tsunamis in the last fifty years it is still thriving but is not really geared for tourists. Kona, on the other hand, feels like a smaller version of Fort Lauderdale. Very touristy and lots of resorts. One of our research interviews with the Kona planning office revealed that the first resort was brought here by the Rockefellers. Interesting.
I’ll be here for a total of 17 days but the first five days were spent with the two Principle Investigators, Dr. Marian Chertow and Dr. Karen Seto, and the project manager, Ezekiel Fugate. Our days started around 6:30am and 7:00am and ended usually after midnight. Because our study sites are on opposite sides of the island we are staying in Waimea, at the northern part of the island. Our partner, the Kohala Center, is also housed here so the location has been nice for these two reasons. The house we rented for our stay is the old saddle maker’s house for Parker Ranch. I’ll write more on the history of the house in future posts when I am near the house history books.
Here was our schedule for “Yale Comes to the Big Island”: June 11th-June 16th:
Friday, June 11th: Arrive in Kona via United Airlines. Rent Ford Escape (not a hybrid) and drive to Waimea. On the way I spotted by friend the Southern Cross constellation as we were driving. That signaled the trip would be good and safe. Immediate trip to the KTA grocery store to stock up on all foods Hawaiian and the essentials like multi-grain cheerios.
Saturday, June 12th: 8:00am breakfast in Waimea. Morning – Rapid Assessment in Hilo with Kasey leading the charge (drove around using the satellite data and ArcMap, Geographic Information System, to groundtruth my assumptions made in the lab). Lyman Museum in afternoon. Lunch at a Hilo Japanese restaurant , Miyo’s, with the University of Hawaii students who are working on the project. That night we went to Christian Kay’s house, a professor with UH and ate dinner with him and his wife Ingrid and there 13 year old son who is a genius. Their home was built in a very eco-friendly manner and was designed by a friend. It sits on an old lava flow which they have been able to add soil to make a large garden with many tropical fruit trees and bushes.
Sunday, June 13th: 8:00am breakfast at the Hawaiian Style Café. Morning snorkeling at Hapuna. Amazing! My cheap reusable underwater camera failed though sadly. It’s old though. From 2006 when I bought it in Australia. I’ll go back to take photos another day. This reef was definitely one of the best resort, inshore reefs I’ve ever seen. Very good condition. After snorkeling we had lunch in Kona and then did a rapid assessment there. Dinner at the Kona Inn after some light shopping. 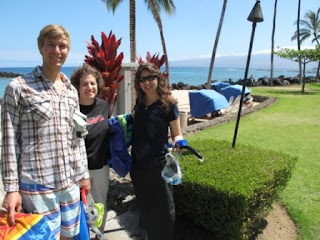 Ezekiel Fugate, Marian Chertow, and Me 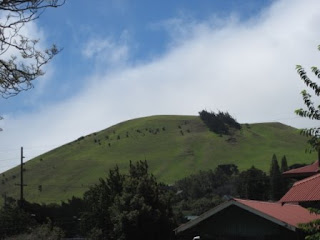 A Waimea Mountain
Monday, June 14th: 8am, breakfast at the house. Morning Plannning Session at the Kohala Center in Waimea to go over the project as a whole and plan for the rest of the summer. Afterwards, while Karen , Marian and Zeke were meeting with Matt and Betsy, project partners, Srinath and I (another student at Yale working on the MFA) went to see Polulu Valley Overlook in North Kohala. Very pretty but made us late for dinner. Went to an Italian restaurant in Waimea where we meet Maura who is now working for the Kohala Center. She is an east coaster from Connecticut that worked for the Blue Ocean Institute out of Stony Brook University for a while. She knows all my old professors from undergrad and did her doctoral research through Scripts in the Caribbean and the Mesoamerican reef system. You can imagine how excited I was she was at dinner. Great conversation and she had great Caribbean advice for my move to Puerto Rico. I’ll definitely stay in touch with her. For the Kohala Center she is leading a research team to quantify fish flows since the state government has been lax in doing so. Right now there is no data on how much local fishers catch and where the seafood goes. Great project! 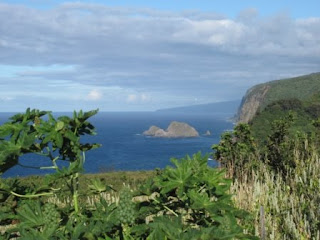 Polulu Lookout
Tuesday, June 15th: 10am meet with the Hilo planners. 1:30 presented our research project to the University of Hawaii after having lunch with the spatial analyst, Donna, from UH. Seminar went well and we received very useful feedback from the audience that will most definitely help our research project. Afterwards, Srinath, Danielle, Hui and I went to see Rainbow Falls and the Boiling Pots. These are water features in Hilo. One a waterfall and the other a really neat river that when in the rainy season looks like boiling water due to all the white water. Srinath and I then went to pick up Max, a Yale student from China doing research on the chemical properties of Hawaiian grown tea leaves. We meet everyone else for dinner at this Thai-Hawaiian style restaurant and ate so much I thought I would explode. Thai pizza, papaya salad, dorian fruit ice cream (home-made), bean salads, spring rolls, and so much more. 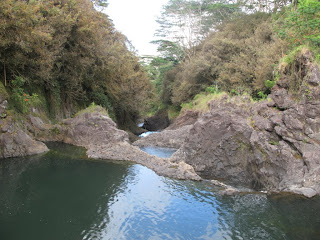 Boiling Pots
Wednesday, June 16th: 8am, Breakfast in Waimea at the Waimea Coffee Company. Meet with Keola Childs at the County Planning Department and then went to Outriggers for an afternoon work session. Srinath, Zeke and Marian meet at one end of the resort restaurant and Karen and I meet at the other (one  a chaste lounge on the patio with beautiful lava rocks and beach behind us – see photo). Afterwards Karen and Zeke went to the Kona Inn for some Mai Tai’s and the rest of us went to a local beach to snorkel – see photos. The fish were great but all the coral was dead. Very sad. It was really neat though because some locals were practicing Hula and drumming on the beach while we swam. Beautiful. After this we washed off and went to the airport to drop off Marian and Karen and to switch rental cars. I had such a great time with them. I missed them the second they walked away from the car. I feel so privileged to be able to work for such amazing researchers and truly remarkable women. Most of my mentors are males and so this has been a very different experience. I haven’t laughed so hard all semester and learned so much at the same time. Through interacting with them I have learned about life, about academia, about food, about family, and about balance. I feel so blessed. Afterwards Zeke and I drove back to Waimea and I entered a very large empty house with thoughts about what the next 12 days will bring. 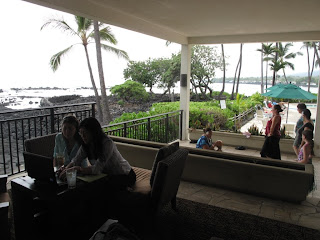 Me and Karen Seto at Outriggers doing work. Hula dancing in the background 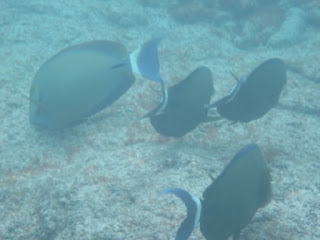